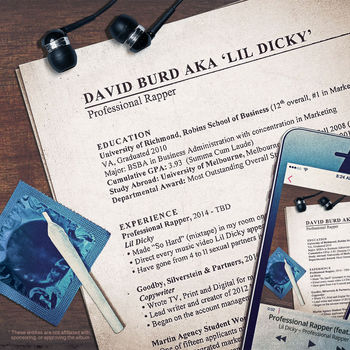 Work (Paid For That?) paroles

Work (Paid For That?) lyrics

My own boss
Work

Last year I was taking them notes, ayy (Notes)
Conference room every day is the woes
Last year at work
I was irked, I was irked

Like, last year at work
I'm like oh, that's my boss, she a bitch
She know this
She lookin' at me every day like "Dave, where you going?"

I'm looking back like, "Hoe" (I hate your demeanor)
"To print some shit" but you don't even know
Now look what happened, now who rapping?

Homie last week I was up in Miami (Great weather)
Got paid to chill in the club
Literally, chilling, like not even rapping
I think I did a good job

Sat there on Twitter, my new correspondence
Is going through all of these wonderful compliments
Used to be scrutinizing all these documents
Now when I sign off on something, it's body parts

Titty, booty, macking a cutie
Got her back in the back of the room of the venue cause she copped that meet and greet
I got them going down in their prime like Aaliyah be
Used to post up, on time, no brakes

Now the Burd post up on the vine, no grapes
Used to have to swallow all the pride
Had to piss out the slacks of the sack in the sweats every day
Used to buy brands, now the brands pay Dave

Like, I just got a box of Pumas, cause they think I'm cool
Watch me mention StarKist Tuna, watch my fridge get full
I used to sit and wait for Friday
But now my whole week like a Friday

Last year I'm stuck up doing shit up in a cubicle
They tell me what to do, I'm thinking "f*ck that shit"
But y'all, I couldn't tell them what the f*ck I'm thinking
Now they're paying just to listen to this shit, I got up on my lid
Got three or four bitches who 'bout to get the fourth down

That's a first, I remember when what lunch I picked was all I get
My bitch make that coffee, now only boss me around when we f*ck (Ayy)
Was missing college but now they bringing me back, it's still fun (Yeah)
God damn Dicky, you too old to be f*cking all these kids
Yeah, I know, but if you can rap, it's a lot less creepy though

I'm smoking weed in public, but it never seem to matter
Dump a bottle of water on your clothes and you ecstatic
I don't ever have to set alarms, I wake up supernatural (Work, work, work)
I can grab a bitch's hand and she will scream "you so attractive"
How did this happen?

It's absurd, it's like, I'm in the industry now, so, I'm seeing shit
Every rapper suck they own dick, it's not just me
Swear to god on the Bible
I don't believe in the bible though, so I made the whole thing up

Did you believe for a minute that the whole rap game suck their own dick?
I hope not. That would be... an exaggeration
I don't think anybody else sucks their own dick
I also don't suck mine, it was a clear joke

Like i don't think people need to be homophobic about that
Nor is there anything wrong with gay people
I don't know like what I can or cannot say at this point
Like what can I say? here's what I can say

This seems like such a... You know like in 200 years no one's gonna be thinking that way
It's just gonna become an antiquated line of thinking
Kind of like how you look back at slavery now
Definitely can't say that, delete that last part
But it's the same you know what I mean like people
Ah, whatever

Work (Paid For That?) lyrics

letra de Work (Paid For That?)

Work (Paid For That?) songtekst