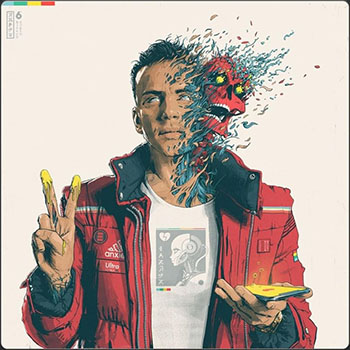 Chillin' with my homies and we vibin'
All this potion that I'm sippin', I ain't drivin'
Life a motherf*cker, but we still survivin'
Colored people time, but nigga, we still arrivin'

Chillin' with my homies and we vibin'
All this potion that I'm sippin', I ain't drivin'
Life a motherf*cker, but we still survivin'
Colored people time, but nigga, we still arrivin' (Ayy, yeah, ayy)

I'm feeling like Andre pre-3K 'cause all I got is Benjamins
Y'all know the regimen, R-A-double-T-P-A-C-K
Rappin' like back in the day, yeah you heard what I say
From EBT and watching BET on my TV to platinum CD

Now I got it like that, the boy brought it like that
Yeah they gon' bring it back
Like the illest sample from the 70's, I'm feelin' heavenly
Grew up in Maryland and now my neighbor is Beverley

Even when Bobby Boy over-the-hill and he's 70
I'ma be packin' that weaponry, I am the greatest alive
You already know it, I don't gotta say it, this shit is telepathy
If you feelin' different, then step to me, 'cause I've been ballin, shot-callin

Droppin' heat back-to-back while y'all stallin'
Y'all wanna ante-up, but I'm all-in
Climbing the ladder, ain't no way I'm fallin
Come here my darling, married to the game

Come now, feel the pain
But I got a side bitch and that's real, we love to make movies, I told you that's reel
That's just how I feel
Tell me what I, tell me what I really wanna give for a life like this

No, the boy won't Fade Away
Take it day-to-day, Everybody wanna hate straight away
That's how we livin' in this world today
I'm Louis, you more C.K. was an Outkast on the come-up back in the day
And now I'm more Andre post-3K, like woo

Ayo, Ayo
F*ck You like Cee-Lo
Buck then I reload, sippin' Pellegrino, shoot the shit like Tarantino
In the cut like Lilo with everybody we know

My style is impeccable and nobody could match it
I'm Bruce Wayne terrorizing Gotham, I'm bat shit
I'm Kim Kardashian with a hatchet, constantly reshaping this body of work, I'm an introvert
Wonder why I smoke dope, no wonder why I can't cope

Far from evil, I'm kinda like Spike Spiegel, a cowboy paper retreival
Bitches jumping to conclusions like Evil Knievel, best believe you, Bitch I'll leave you (stranded)
Tryna dab me up left-handed, I'll leave you defeated and amp*tated 'til the blood coagulated
I force the crowd to throw they hands up like cannibals

My god what a f*ckin' animal
Sicker than giving brain to Hannibal Lecter
You come correct but I come correct-er
Food for thought, but I hold the lecture

Ayo I kill the pussy, yeah I make (reversed) cremate
I'm an original screenplay in a world full of remakes
I record my shit the first time, you need more than three takes
Lyrically I'm undefined on this f*ckin beat tape
(My god)